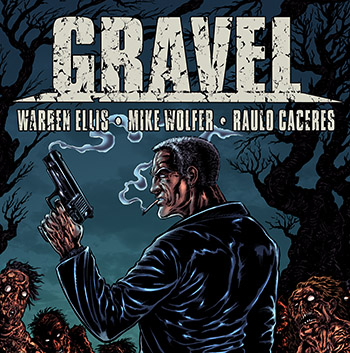 Spanish artist Raulo Caceres might not have had much exposure to the US market a year ago, but his work on such projects as CRECY and DOKTOR SLEEPLESS has turned the spotlight on this up and coming artist. And with his rising popularity comes his biggest project to date from Avatar Press, an ongoing series by creator Warren Ellis. GRAVEL features the lead character from Ellis’ original Strange Killings epic, in which Sgt Major William Gravel has appeared in 6 TPBs.

Raulo’s art has often taken on a classical element, and his first two projects with Avatar were a great chance to showcase his ability. “In Crecy and in Doktor Sleepless I used the drawing style that I use always,” notes Caceres, “but perhaps increasing the detail level (some Spanish draftsmen suffer the “horror vacui”, fear of the blank space void). I like to ink the scenes with big contrasts of light and of shades to create an atmosphere that is expressive and sinister.”

Warren Ellis made use of Caceres’ unique style again in Doktor Sleepless. “Raulo was

tasked with producing covers that looked like woodcuts,” says Ellis, “that recalled the late 19th century through to the days of Tesla and James Whale movies.”

“Drawing the covers of Doktor Sleepless is amusing, but also a challenge,” says Caceres, “because I have not played with science fiction a lot and for me, it is difficult to draw technology. I also had not worked drawing many covers, except for my own comics. It is good for a draftsman to work on new topics and to learn more.”

Now working on his next project, Caceres is the first artist of a revolving team that will be working on GRAVEL. This will be Ellis’ second creator-owned, ongoing series from Avatar, and Caceres’ third time working with the British scribe. “I feel very fortunate working for Avatar with a genius like Warren,” says Caceres. “I enjoy the scripts and try to enter his head (like we say in Spain, a “privileged skull”) and I intend to draw all that he has imagined. I hope to learn much from this creative relationship.”

hero William Gravel. A departure from longbows, Tesla-coils, and Caceres’ traditional genres, GRAVEL promises to be one of the more interesting ongoing series to begin in 2008. “I admit that initially the character didn’t attract me,” claims Caceres. “I had previously never liked this type of character — hard men with their weapons, their tobacco and their balls — too much testosterone! In the comics that I have written and drawn the main characters were always women — the “femmes fatale” are those that distribute the beatings! But Gravel is different from the typical male-without-brain mixture. And adding supernatural elements to the mixture, the result certainly works.”

“I believe that the violence is just as valid a topic as any other for art,” notes Caceres. With the brutally creative minds of Warren Ellis and Mike Wolfer writing the series, provocative material will assuredly grace the page. Nevertheless Caceres is anxious to artistically interpret the often shocking material produced by these writers. “For years, sex and violence have been very important in my comics so it’s my pleasure to put my mark on this field. But I am aware that the violence should be represented with aesthetic beauty and the correct composition. Otherwise, they would only be brains stamped on a page.”

Raulo goes on to say about Mike Wolfer, GRAVEL co-writer and artist on the original Strange Killings run, “Mike Wolfer is a great professional. I value his perspective, the collaboration of the minds, and his talented visual language. He is one of those designers who knows that to make comics is more than to just draw well and that it is necessary to manage concepts like the composition or the reading rhythm creatively.”

GRAVEL #0 will arrive at local comic shops in January 2008. The #0 issue is specially priced at only $1.99, and features the full-color artwork of Raulo Caceres. The GRAVEL full-size monthly will begin in March.

This entry was posted in Creator Talk, Gravel, Warren Ellis. Bookmark the permalink.