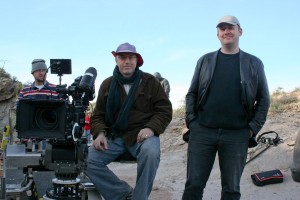 Garth on set of Stitched, his first attempt at directing live action

This past Saturday at the New York Comic Con, Crossed creator, Garth Ennis, announced he is teaming with Avatar Press to create live-action Crossed webisodes.

With an eye on?airing in Fall 2013, they will begin filming in Spring of next year. Ennis will write and direct, while Avatar Press Editor-in-Chief William Christensen will act as Executive Producer. Each webisode “season” will contain six episodes and each will be around 5-6 minutes in length. Ennis explained each episode will be self-contained, but create an over arching narrative to tie them all together. The iconic writer will be pulling from previous published Crossed comics, as well as scripting new material. Ultimately, Ennis and Christensen hope to gain enough interest from the webisodes to create a feature film. The webisodes will likely be Rated R, while the inevitable DVDs will be unrated.

Ennis also announced he will be returning to writing Crossed: Badlands with issue 25. “The Fatal Englishman” will run 4 issues and feature a small military unit who decide it is time to strike back at the Crossed. This arc will tie in to issue 50, which Christensen refers to “Patient Zero,” spotlighting when the outbreak initially started.

To see a video interview with Ennis by Newsarama directly after the big announcement at the Garth Ennis panel at NYCC, click here.