The Mayan calendar predicts this Wednesday, 12/12/12, will spell the end of the world as we know it, but?David Lapham?feels fine.

But did you know the Eisner Award-winning author?also currently writes three original series for Avatar Press, and all three arrive in?comic shops this Wednesday?

In addition to the debut of Caligula: Heart of Rome – the sequel to his supernatural horror tale set in ancient Rome – Wednesday will also premiere the collection of his original Ferals werewolf crime/horror comic series, and the most recent issue of his detective series, Dan The Unharmable #8.

The first Caligula ended with Gaius Julius Caesar Augustus Germanicus meeting his fatal end and Junius ?Felix? taking on the role of the new Caligula. Is that where the new series picks up?

The new series picks with many of the same characters but several years later.? We find out that there’s some pretty sick things going on through the underbelly of Rome.? Caligula was destroyed but the demon within’ him lives on and has found a new host which has for years been committing the most horrible murders through Rome.? Laurentius is the only one that knows the murderer is part of the Caligula demon, but his superiors think he’s crazy.? Meanwhile, Junius has fallen far into depression and depravity.? He’s sold his Olive Farm and runs a small stable of gladiators to make a living but gambles and whores away all his earnings.

Laurentius, the noble Roman who was scarred defeating the demon horse, Incitatus? what will his role be in this new series?

He’s a big part of this series.? The detective pursuing the serial killer.? Eventually he will end up leaving the Praetorian Guard to find and destroy the the new possessor of the Caligula Demon.? It’s his obsession and it’s personal.

Is this story self-contained, where new readers can easily pick up? Or, is the first series required reading to make sense of what is going on in Heart of Rome?

It’s not necessary.? Everything that’s important is explained and some of the new elements, like a young Nero, are known to most everybody.? Still, one of the elements here is seeing where the characters you grew attached to in the first book have ended up.? So, those readers will get a larger sense of the drama. 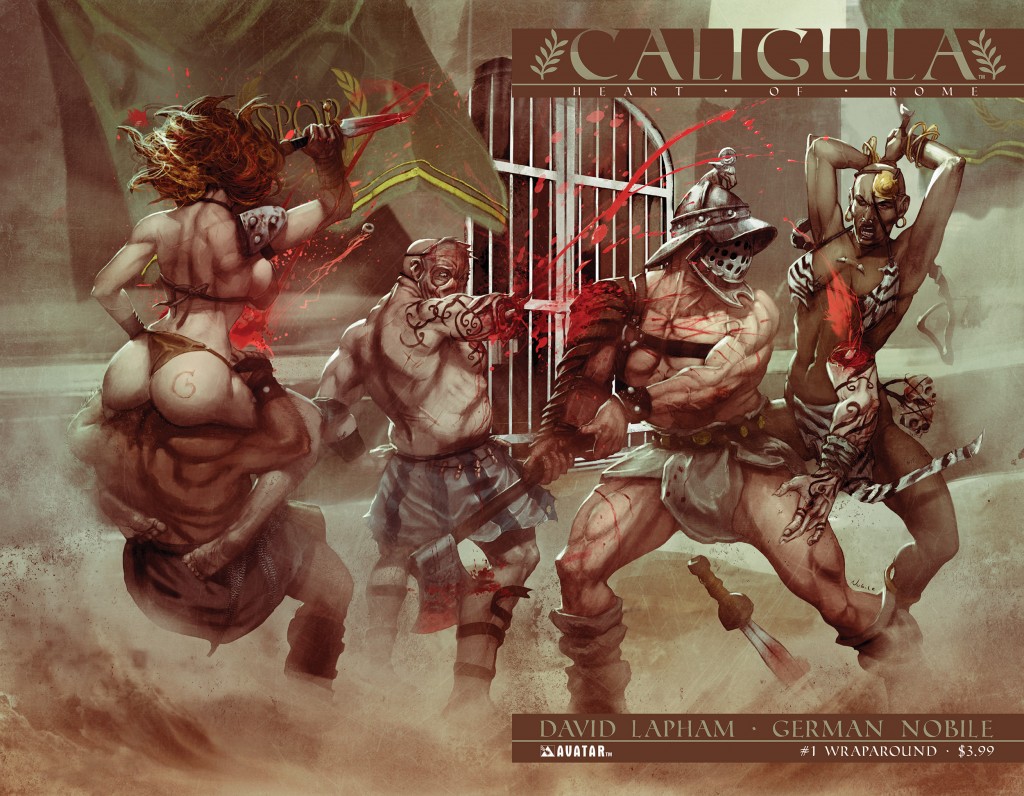 What is it about the story of Caligula ? whether the setting, the theme, the characters ? that draws you back? Or, when writing the original Caligula, was there always a second story to be told?

The time period is so twisted all on its own.? The stories kind of just suggest themselves.? Introduce a demon into the mix and everything just fits in like a perfect puzzle.? In a matter of years, we go from one of the most depraved and insane men who ever lived in Caligula, to the next most insane and depraved man who ever lived in Nero. 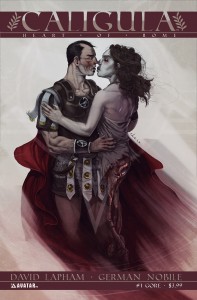 Since this is a period piece, set nearly 2,000 years ago in ancient Rome, did you find yourself doing a tremendous amount of research? Was this a challenge, or do you enjoy learning more about that time period so you could enhance the story?

You are known for your over-the-top gruesome horror. A Comic Book Blog described your Crossed: Family Values as ??the most visually disturbing comic of 2010.? The original Caligula did not disappoint. Can fans expect that same level of horror in Caligula: Heart of Rome?

It’s very disturbing visually.? It all fits.? Even better here than in Crossed.? I feel, while Caligula might be more visually graphic, it’s also more purposeful.? Again, there’s a theme of depravity.? But the heart of the story is that one man is trying to retain his honor and dignity in the face of that.

Do you find it to be a personal challenge to out-do yourself when it comes to providing your fans with the type of gruesome horror they have come to expect from David Lapham?

I did when I did my first Crossed.? I felt that Garth had created that and established a level of disturbing gore that I had to try and match and surpass if I could.? But after that, I just write them.? Avatar books have established a certain type of – of almost their own genre.? We select subjects and themes that fit in that zone and I just write. 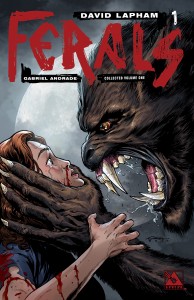 Let?s discuss your on-going horror series, Ferals. Or, should I say, ?Crime/Horror? series? When describing the story, for simplicities sake, I often refer to it as ?Sopranos meets Werewolves.? When developing this series, did you take the approach of developing the crime/drama story, or redefining the werewolf mythos first?

The idea was to do Werewolves differently.? In that I had a certain tone and landscape I saw for a setting.? The snow, the mountains.? Small town America.? Simple people.? Dale Chesnutt suggested himself.? He’s the detective from the Mayberry on the wrong side of the tracks.? He’s really turned into a very dynamic character and very natural to write.? For my part, I do think of it like the what if the Andy Griffith Show were invaded by booze and werewolves… and David Koresh.

Your first arc of Ferals (issues #1-6) is collected for the first time this week. For those readers who haven?t tried Ferals yet, what can you tell them about this series? 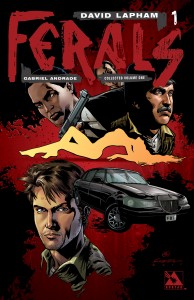 Ferals is the story about what if Werewolves were a people more than just monsters? ?What if they were like the Quakers and lived in cloistered societies and just wanted to be left alone to be who they are? ?But then something happens to draw the outside world in and a drunk, womanizing cop became infected with their disease.? He became the middle man is a potential explosion between these small town folk and the government.

Having read the single issues following the collection, it is apparent you are building toward a larger story than just the murder mystery we are presented in the first arc. There is an ominous feeling of big things looming ahead. Can you give fans a tease of what to expect?

I think one of the most successful aspects of Ferals is that we really created a credible secret society within’ our own.? The Ferals are out there and they want to be left alone, but if we’re not going to leave them alone than we’re going to die.? Nobody puts the Ferals in a corner.

As far as a teaser, we definitely take it to the next level in the second arc.? Dale infiltrates a new town of Ferals and learns that they are very real and diverse people. He also learns there is dissension among them ? or at least disagreement on how they should ?attack? the human problem. 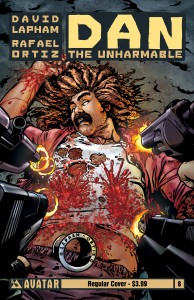 And then there is Dan. The Unharmable Dan. The carefree and bum-like detective, often compared to ?The Dude,? in The Big Lebowski. Where did you get the idea for this character?

From King Buzzo of the Melvin’s hair.? I wanted to do a character with that hair.? Had to.? I also wanted to do more traditional crime and going back to Stray Bullet’s Amy Racecar and Sadie Dawkins from Young Liars. I love the idea of a character that is unstoppable, at least physically.? People think that means there’s no jeopardy, but I think that heightens everything.? There are so many things worse than dropping someone on their head from 40-stories up.

Do you have fun finding different ways for people to try to hurt/maim/kill him?

Not really.? I mean it IS fun, but I don’t spend a lot of time on it or make it a point of pride.? I just try and think creatively there.

For new readers, what can they expect to find in the first story arc, being collected this January?

I think they can expect a very traditional detective noir story skewed only by the fact that the characters are unique.? I actually don’t think Dan is Lebowski in terms of personality, but there is a tone that that film has very traditional noir elements but the characters are oddballs and color the story that way.? Anyway, it’s about an indestructible homeless man who likes living a simple, uncomplicated life taking small detective jobs for a few bucks or sometimes sex.? He’s built his life mentally indestructible as well.? You can’t insult him.? He doesn’t get angry.? And he doesn’t become attached to people.? His life gets very complicated when he learns he has four children fathered by a woman he doesn’t remember who has been murdered in very classic Hollywood fashion.?? The kids hire him to solve the murder forcing Dan to learn a little something about his life he doesn’t care to remember. 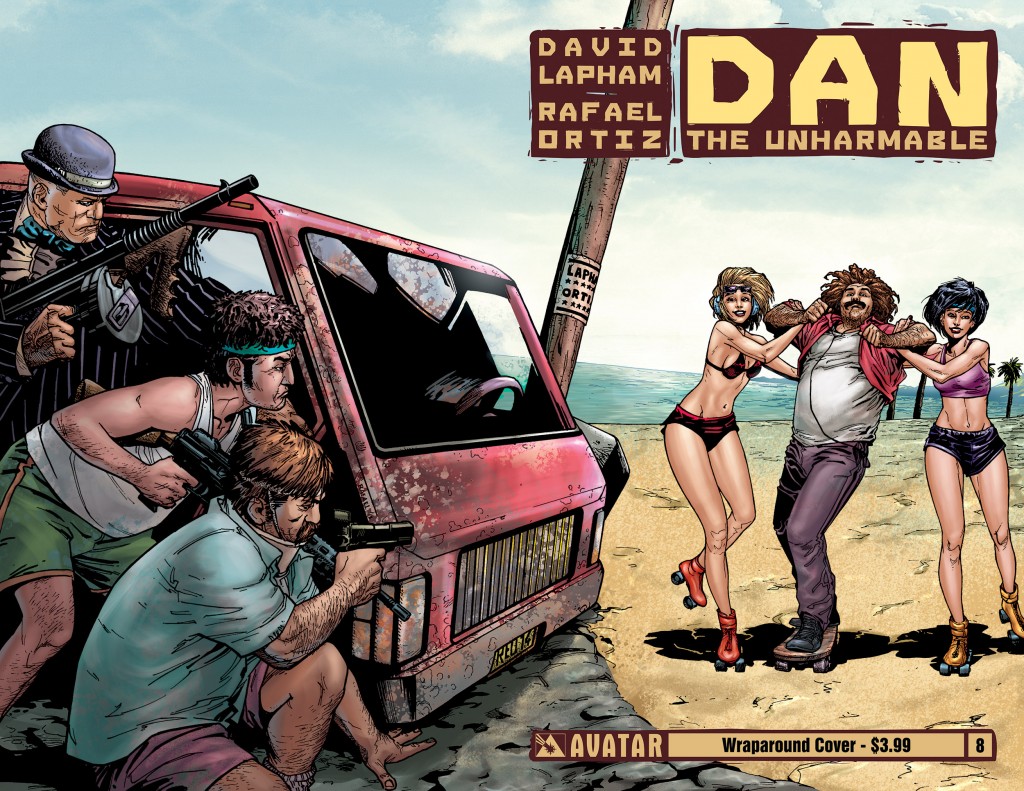 Who is scarier? Caligula ? a seemingly normal person possessed by a demon, Crossed ? homicidal maniacs running wild, or Ferals ? ancient beasts who can rip you apart as soon as look at you?

Why?? So you can use it against me and force me into embarrassing moments and take pictures of me screaming like a little girl and post them on the internet, so I can never show my face in civilized society ever again as long as I live and have to get plastic surgery and move to Southeast Asia and die in an opium den alone and unloved?? No thanks.

I ain’t scared of nothin’.