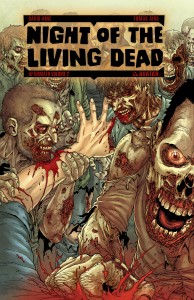 David Hine has quietly made a name for himself as one of the best horror comic authors today. ?From his work on Darkness to Storm Dogs to animating the classic zombies of the Night of the Living Dead, his tales have inspired dark dreams and blackest terrors. ?David’s run on Night of the Living Dead: Aftermath presented a new vision of a classic horror. ?Set in the excesses of the late 1970s, the series followed a group of survivors that fled Las Vegas as it fell to the walking dead.

With interesting twists and turns, Hine created a new mythology that fits perfectly alongside tales spun by Romero, Russo, and Wolfer. ?Now the final chapter of the Aftermath series is being collected in the Night of the Living Dead: Aftermath Volume 2 TP in this month’s issue of Previews. ?The collection is a tasty morsel of ghoulish delights that will inspire your nightmares to a frightening level. Experience a new vision of zombie terror and join the legion of the shambling and gnashing undead. ?Ask your local comic shop retailer to reserve a copy of this new nightmare for you today.