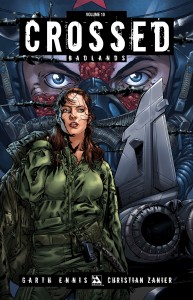 Garth Ennis’ long awaited patient zero story, “The Thin Red Line”?from the recent Crossed: Badlands #50 – 56 run?is collected in Crossed Vol 10 Trade Paperback this month in the August issue of Previews. ?If you were one of the thousands of fans who were waiting to get some clues from the creator of the Crossed universe as to how and where the plague began, this is your chance to experience the terror alongside your fellow infected. 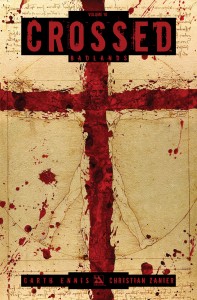 created with a story that fans have waited over five years for!? The Crossed outbreak created a miserable grueling world of monsters that dash out all hope of survival and ensures a terrifying end to everything in their path.? For the first time, master storyteller Garth Ennis takes you back to the early days of outbreak and delivers the unexpected ? a patient zero tale.? With the outbreak spreading like wildfire across the globe, a group of soldiers attempt to piece together how the disease spread so quickly and to reverse the horror they see taking place in the streets.? And as they struggle to catch up with events, a fleet of nuclear-armed planes carry the extinction of the human race as they race towards America, with only one British flight crew to stand in their way.? No one can deliver this level of poignant horror like Garth Ennis.? In a world where there is no help and there is no hope?there is only the Crossed.? Crossed Vol 10 collects the story Thin Red Line from issues 50 ? 56 of the ongoing Crossed: Badlands series.? Available as both a TPB and Hardcover.

Check with your local comics retailer to reserve a copy of this vital part of the Crossed mythology. ?Crossed Vol 10 TPB is on sale in October.