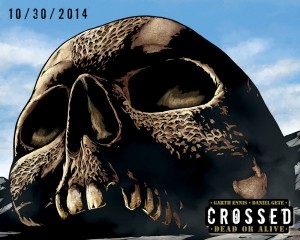 In the Garth Ennis Crossed Spotlight panel at New York Comic Con, many of the details of the upcoming live action and web comic details of Crossed: Dead on Arrival were revealed.?William Christensen? announced at NYCC on Saturday night that the?Garth Ennis?created webcomic coming October 30th entitled?Dead on Arrival?will also be part of a series of filmed live action webisodes directed by Ennis. The comic will run over 12 weeks starting October 30th, running 12 Thursdays in a row except for Christmas.

Avatar will also be doing?fundraising for the webisodes. The funding will be gathered through Avatar Press?s own infrastructure rather than through a site like Kickstarter. Rather than a system of donation, there will be paid tiers that result in specific products. Buying from the tiers will support the filming of the webisodes and all items will ship by December. Since it take so long to make a filmed series, rewards won?t be delayed until after production. It will be ?exactly what Garth wants? in terms of content and direction.

As the funds start coming in, pieces will be put together on professional budgets for large-scale scenes and special effects teams. There will be an ongoing multi-month fundraiser, Christensen said. Unlike Kickstarter, there won?t be a limiting goal to reach before moving forward. It?ll take some time, he said, and their initial goal is $100,000 for Season One. They are hoping to surpass the goal and put the extra money into higher production quality. They want to develop 3 or 4 seasons of webisodes that then move into a Feature Film. Ennis reportedly already has the Feature Film script written for?Crossed.

Additional details about the webcomic, the webisodes, and the fundraising will be released soon.