Battle of the Battleships 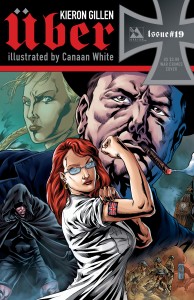 Kieron Gillen’s fans have been taken on a powerful ride through a violent alternate history in which World War II has taken a terrifying turn. ?With the introduction of the Ubers into the waning days of the war, the death and chaos of extended super human warfare has turned history on its ear. 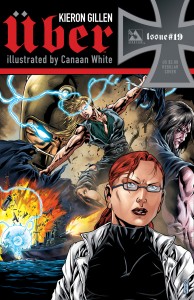 As we have seen other countries begin to develop their own super soldiers in an attempt at slowing the German Battleships, we’ve been leading up to the inevitable…a battle between Battleship class Ubers. ?There is much speculation about which country will be the first to develop a successful Battleship after the terrible turn that Battleship HMH Colossus took when facing the German weapon Sigelinde. ?As England, Russia, 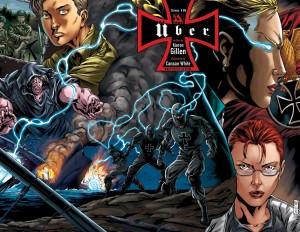 and the United States vie for control of the technology and the first successful counter to the Germans, we continue to read along and wonder who it will be.

If you have not been reading Kieron Gillen and Caanan White’s Uber series, it is a must-find at the comic shop for you. ?This is one of the most powerful narratives being published and like the countdown clock to doomsday, it is nearing the tolling of the bell. ?What horror await in Uber…find issue #19 in your local comic shops now along with Volumes 1 and 2 of the trade paperback collections. ?Join in the fight!