The winners of the annual Horror News Network Horror Comic Awards are out!  Avatar was nominated for several categories and was featured in the Staff Selections as “series of the year!”  Rover Red Charlie was selected by Stephanie Shamblin Gray for the honor. 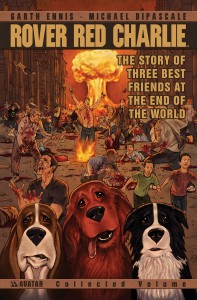 “Rover Red Charlie was such an amazing story.  Garth Ennis was at the top of his game and absolutely nailed the very human emotions of terror, confusion, and even hope by using a cast of dogs as our protagonists.  A horror story so close to the heart is rare and wonderful.”  – Stephanie Shamblin Gray.