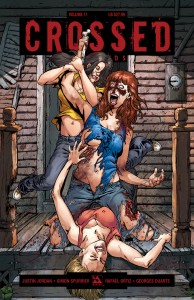 Simon Spurrier has visited Crossed before, his long form webcomic Crossed: Wish You Were Here is a staple in the universe and delivered some of the most memorable characters of any Crossed tale to date.  In this volume of the collections he takes you to a picturesque environment in the English countryside with tweeting birds, friendly vicars, crumpets and jam, and a mob of Crossed lurking near the duck pond.  No one sees Wheezy the fat asthmatic kid hiding up in the old tower but if he shows his face it will only be the farmer’s wife between him and a bloody fate.  The problem is, she’s Crossed too.  This story delivers chills in a way that would make the old EC tales proud. 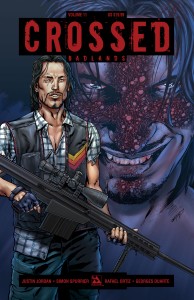 Justin Jordan’s first foray into the Crossed universe takes you to the heart of problem with trusting anyone, Crossed or not, in this world.  Two women attempt to escape the band of monsters out for their blood.  When a mysterious unseen Samaritan helps them escape to a sanctuary it seems as though they’ve found what little safety there is in the new world order.  But trusting anyone in the world of Crossed usually leads to a gut-wrenching and miserable end.

Stop by your local comic book shop to experience the ultimate in uncensored horror.  Ask to see their Crossed library and immerse yourself in a masterpiece of modern terror.