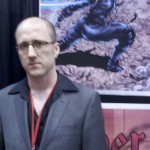 Kieron Gillen’s masterful altered history tale that introduces super soldiers into the waning days of World War II has captured the imagination of comic book fans everywhere. Uber tells the dark story of extended and escalated world conflict that takes the very real horrors of that age and turns them into monsters that make the atomic bomb look like a firecracker.

The third volume of this amazing and terrifying series is available in local comic shops this week.  Catch up on the building horror as the Allies race to counter the building misery of the Nazi advance over Europe and learn the circumstances that turned three normal people into unstoppable Battleships.

PRODUCT DESCRIPTION:     The horrors of enhanced soldier war have taken a dire turn 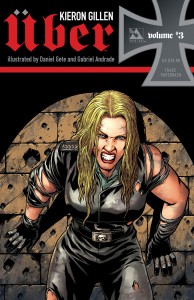 for the Allies.  Their attempts to develop a counter to the German Battleship Ubers have led to a crossroads in development.  But the discovery that the Nazis have not only discovered the same weapons but have improved upon them leaves a terrible hole in their ability to mount a defense.  With both sides suffering herculean losses and the devastation of world war decimating every nation, the escalation of super human combat is making the Allies desperate for foothold.  Kieron Gillen (Journey into Mystery) has created a unique and terrifying mix of the fantastic and the horrible that will leave you speechless in the blood soaked pages of Uber.  The horrors of super human warfare are immeasurable.  This volume collects issues #12 – 17 of the ongoing Uber comic book series.