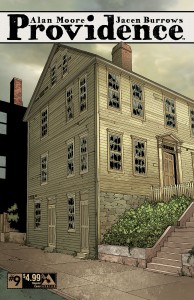 Fans of Alan Moore’s immersive slow burn horror series Providence have a new entry in their analysis of the Lovecraftian tale in comic shops now!  Issue #9 of the heralded narrative has arrived and with it new terrors and temptations for Robert Black as he struggles to complete his research.  We’ve seen the intrepid reporter encounter some of the most horrific people and creatures but the dread is still building toward a final revelation.  Fans and 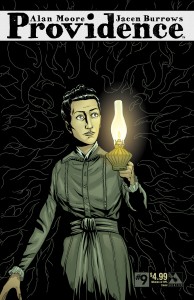 scholars alike have speculated what that might be, but no one save Alan Moore and his collaborator Jacen Burrows really knows what fate is about to befall Mr. Black.

Stop by your local comic shop today to get the latest issue or to get introduced to one of Alan Moore’s most ambitious and complete masterpieces. 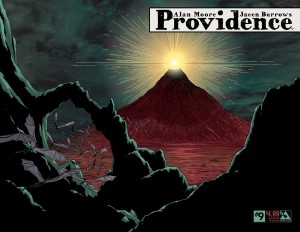 The world of H.P. Lovecraft has begun to invade the mind of Robert Black. His quest began as project to write a book but the more he is exposed to these horrors the closer to the edge of insanity he is pushed. The cracks in the world seem to be widening as he nears some inexplicable crescendo of horror. Alan Moore and artist Jacen Burrows have created the most realized version of Moore’s Lovecraftian vision
ever published. Fans and classical scholars have flocked to the pages of Providence to decipher the many layers of story being told in this masterpiece. Moore has written every cover detail, every single page, and every nuance of this work to create an unforgettable series. Fans of Moore’s immersive style and meticulous grasp of storytelling will be thrilled to add this essential piece of comics history to their collections!