Decapitated Dan does a great job each with giving us reviews of the latest horror comics on Comic Related’s Horror Comic Roundup. ?The latest review of Uber #4 has high praise from horror master Dan and his crew of creepy crawlies. ?But don’t take my word for it, here it is straight from the monster’s mouth: 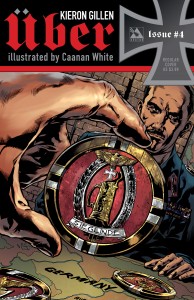 Decapitated Dan:?Everytime I think this series can’t get any better, a new issue comes out and it gets better. I bet I sound like a broken record at this point but man Gillen and White just deliver one hell of a comic book issue after issue. #4 really starts to get the ball rolling forward, as now both sides of the war have super soldiers. I absolutely loved the scene where a soldier with the new powers tried to lift a car over his head a little too soon into his development. Then when the issue comes close to the end, they deliver the reader a scene that shows the full potential of what these soldiers are becoming, and it is jaw dropping. The more I think about it, the clearer it becomes, Uber is the front runner for Best New Series of 2013. This is one book you should not be missing. -?Dying Breath 5.0 out of 5.0

You can read all about the other books reviewed in Horror comic round up every week right here: ?http://comicrelated.com/news/21916/horror-comic-roundup