PRODUCT DESCRIPTION: ? ? GARTH ENNIS has redefined horror with the grueling 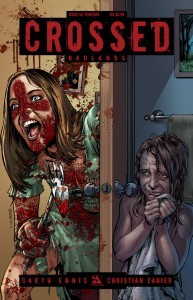 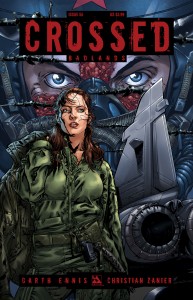 world of Crossed. ?In this penultimate issue of ?The Thin Red Line? we trace the steps of C-Day, the horrific event that turned the planet into a charnel house. ?As the last vestiges of the global governments attempt to identify and contain the rapidly spreading plague, a group of soldiers are sent on a desperate mission to avoid nuclear Armageddon in the middle of what appears to be the End of Days. ?Crossed fans have waited over five years for this story? to finally have some glimpse at the cause of the outbreak. ?But be warned?once you see these images of depravity, you can?t unsee them? no matter how badly they scar you. ?Available with Regular,Torture,and Red Crossed Incentive covers by Christian Zanier, a Fatale Fantasy cover by Matt Martin and a Wraparound cover by Gabriel Andrade.

PRODUCT DESCRIPTION: ? ? The Dicks are back, now as perhaps the worst masked heroes 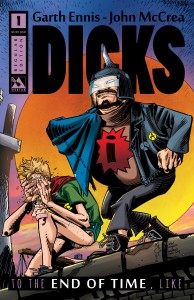 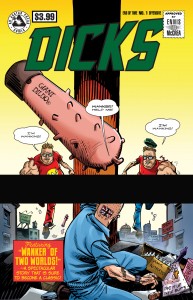 the World has ever seen! ?Fondly miss The Boys? ?Well, this won’t help much as GARTH ENNIS and JOHN MCCREA have even less respect for heroes with Super Dicks! Join the boys as they return to their riotous roots with the new misadventures of Dougie and Ivor! ?Just when you thought it was safe to go back into the comic shop, the Dicks are back for a new round of the most offensive misadventures imaginable. ? Available with Regular, Offensive, and Classic Moment Incentive covers by McCrea.

PRODUCT DESCRIPTION: ? ? ?Jesus has risen and walks among us again. ?But thousands

years of recounting the stories of the Bible won?t prepare mankind for the truth about the All Powerful. ?MIKE COSTA pushes the limits of sanity in the world of JONATHAN HICKMAN?s divine war. ?Sacrilege and blasphemy are the order of the day as the human race attempts to cope with the true intentions of God returned. ?Available with a Regular, End of Days, and Iconic covers by Jacen Burrows, a Carnage Wraparound cover by German Nobile, and a special Gilded Retailer Incentive Cover also by Burrows. 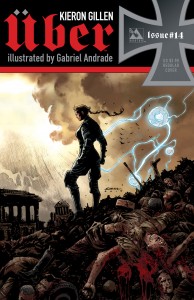 incredible visceral bloody misery to the pages of ?Uber Year II.? ?The Russians have a monster. ?Katyusha has activated and appears to be Battleship class. ?But she was already a wild card, uncontrollable and unstable. ?How can they hope to base their military survival upon the shoulders of a psychotic soldier? ?The German Ubers continue to push their advantage in the world theatre and the ground quakes from their titanic powers. ?Casualties continue to mount in a conflict that is quickly sending the world to the brink of utter destruction. ?Available with Regular, War Crimes, and Wraparound covers by Gabriel Andrade, Propaganda Poster cover by Michael Dipascale, and a special Blitzkrieg Incentive cover also by Andrade.

Visit the Comic Shop Locator Service to find a comic book shop near you: ?http://www.comicshoplocator.com/Home/1/1/57/575