PRODUCT DESCRIPTION: ? ? GARTH ENNIS has made amusing readers the highest? 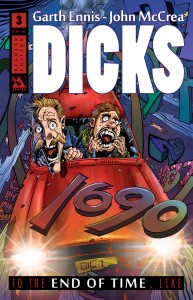 priority as he and JOHN MCCREA send the Boys from Belfast on a trip through time! The Dicks are here to leave no insult unslung and no offence untaken as they gather artifacts through the ages trying to prevent the end of us all. Or, well, at least prevent a very bad day for a couple folks. 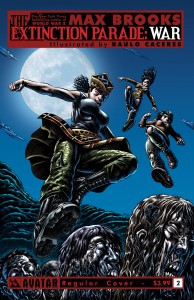 new chapter in the horror event of the year! The vampire race has declared all-out war on the subdead zombie hordes. Now blood drinking aristocrats stand shoulder to shoulder as they wade into the wave after wave of shambling plague that has nearly wiped the human race from the Earth. But centuries of privilege have made the vampire race soft and dependent upon servants. With the realization that the end of humanity also means the end of vampires, they attempt to do what they have never as a race been able to accomplish – learn new ways to fight! 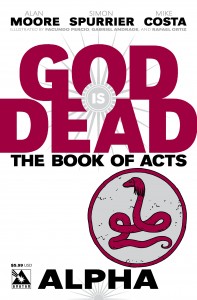 of Gods and men in the biggest event of the summer! Two giant-size issues could only be kicked off with the biggest writer in all of comics, ALAN MOORE, as he brings a tale only he could tell – when his personal God Glycon comes to Earth! Reunited with Facundo (Fashion Beast) Percio, Alan himself stars in a story about where Gods really get their power. Then SIMON SPURRIER redefines a lowly cherub into maybe the most destructive of all the Gods, one who knows how to use modern human weaknesses! And ongoing series scribe MIKE COSTA finally reveals the greatest mystery of the series – who actually killed God? 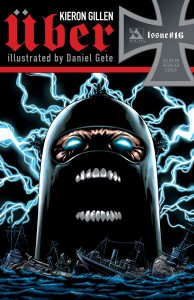 war! With the change in naval power, and new abilities unearthed, the arms race for better Ubers is on. With Sieglinde on the sidelines and recovering, the Nazi effort is having to change focus, with horrific results.