Are You Prepared for the Chaos of the Dark Gods? 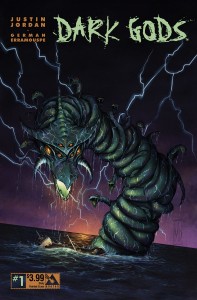 Justin Jordan brings his view of the chaos before mankind to Avatar with the November release of Dark Gods #1. ?The issue introduces the concept of what came before the big bang. ?Creatures of chaos and darkness that fed upon swirling anarchy of pre-being. ?Those forces still seek to enter the well organized world of human beings and there 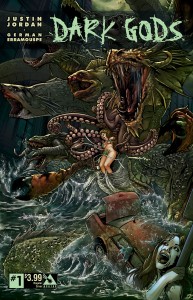 are those among us who facilitate that return. ?This is the story of people that chip away at the fabric holding back the chaos until it comes flooding in.

Jordan has delivered tales of supernatural horror before, but this new series is an uncensored look through the fog of reality and into the maw of insanity. ?In his own words Jordan says that “Dark Gods is about a universe where the order we impose on chaos is

slowly stripped away and we’re made to see just how deep and dark reality runs. ?Because the chaos is aware and it wants into our orderly universe. ?When we created the gods, we gave them a way in.”

Ask your local comic shop to reserve a copy of Dark Gods #1 for you today and prepare for the abyss to stare into your heart.