This weekend comic book creators Mike Wolfer (Night of the Living Dead, Stitched, Gravel) and James Kuhoric (Six Million Dollar Man, Army of Darkness, Stargate SG-1) will be appearing at the Baltimore Comic Con. ?They will be talking to fans, discussing new projects, and signing comics for anyone interested.

Mike Wolfer is a comics veteran who has done everything from early indie creator owned comics to licensed properties to big-name creator collaborations. ?He’s worked with Garth Ennis, Warren Ellis, and a host of other well known writers in the industry. ?His creator owned project Ragdoll was just successfully funded in Kickstarter and Mike will have details about the upcoming project for fans and supporters. 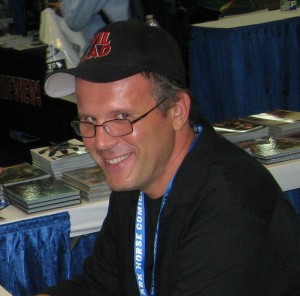 James Kuhoric has written stories for some of the best horror and sci-fi properties in comics including Army of Darkness, Stargate SG-1, Battlestar Galactica, and The Six Million Dollar Man. ?He will be talking television, movies, comics, and new projects with fans at the Avatar booth all weekend.

If you are coming to Charm City’s biggest comic book convention this weekend, make sure you stop by the Avatar booths ?#2208-2209?and talk comics!