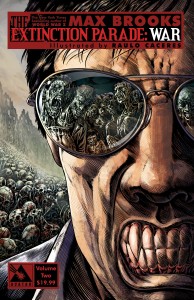 Max Brooks has been reinventing the zombie genre for year with his well researched and innovative stories about combating the undead.  His Zombie Survival Guide is an instruction manual on surviving the uprising of the shambling dead.  But what happens if the ghouls win?  What if the human race is pushed to the brink of extinction by a wave of zombie plague?  What happens next?

In the pages of Extinction Parade, Brooks details how other hidden subspecies would respond to the potential extinction of man.  How would the predatory undead species of vampires react to the certain annihilation of their primary food source?  This second volume of Brooks’ zombies vs vampires epic reveals the evolution forced upon the vampire race in order to react to the changing population of the planet.  Fans of supernatural horror and specifically Brooks’ creative approach to them will enjoy this continuing series of graphic novels.