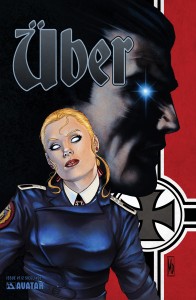 Fans have called Kieron Gillen and Caanan White’s Uber the best new series of 2013. ?Its mix of brutal war violence and horrific escalation to the events of World War II has struck a chord with fans of the altered history and super soldier genres. ?As legions of readers clamor for more Uber stories, Bleeding Cool Magazine #8 supplies a special exclusive digital download of an exclusive Uber #1/2 story revealing the back story of fan favorite battleship, Sieglinde.

The free downloads can be obtained by picking up a copy of the special $1.99 priced issue of the #1 comics magazine in the market. ?Also featured in the issue are articles you can’t find online from some of the biggest publishers and projects of the new year. ?Rich Johnston spills the beans on DC’s 5 Years Later and speculates on what comics will be out of the quarter bin and red hot on eBay in the coming months. ?Bleeding Cool Magazine #8 is in stores on Wednesday 2/5!