The following Avatar Press comics are new to ComiXology on Wednesday?2/12/14:

PRODUCT DESCRIPTION: The next gut-wrenching chapter in the life of William Gravel, Combat Magician has begun! Locked away in military prison since the destruction of the Major Seven, Gravel has been content with having all of his needs met by the British Army, even though a man with his supernatural abilities could never really be contained. Life has been good. Until today. A horrifying terrorist threat has struck the heart of Tokyo, a rogue Combat Magician, driven mad by the magic he wields, and a former trainee of Gravel. 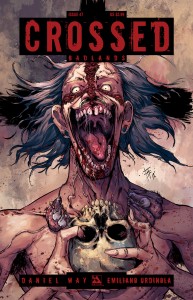 PRODUCT DESCRIPTION: DANIEL WAY?s tale of horror at sea continues as the coast guard crew?s plan to start a new life on a remote island continues to develop. But something is rotten on board the ship and the more the Captain tries to cut it out, the more his control starts to decompose. Crossed C-Day 2014 is coming and the best way to prepare for the annual horror is to read as much Crossed: Badlands as possible!

PRODUCT DESCRIPTION: The horrific final issue! In the explosive conclusion of the ?Seven Swords? storyline, all-out war erupts between Tokyo?s yakuza clan and the undead strike force of Stitched! Kenji Nakamura?s quest for revenge hits a shattering roadblock as allies become enemies, sacred trusts are violated, and deadly deceptions are revealed. Now, the man who once commanded the supernaturally-charged assassins must fight for his life against the yakuza targets and the Stitched themselves! But the vicious, rotting creatures of destruction are about to be confronted by an unstoppable force which they have never before encountered, one which could doom every participant in the horrific battle to a shrieking, violent death!

PRODUCT DESCRIPTION: ?War Goddess is the mature readers amazon. Unleashed from an imprisonment imposed by Pandora centuries before, Satheeno’s ravenous hunger must be satiated with the flesh of the living, and she would like nothing more than to gnaw on the bones of Theronia, who has guarded over her resting spot and kept her in torturous exile. But why would the Harpies now defend one of their most hated enemies and why has the curvaceous Harpie queen Ello forsaken her honor to lead her sisters at the side of the blood-thirsty Gorgon? Only Pandora can possibly save the mythical huntress now, but Theronia is not all she seems? And has her own personal surprise waiting for Pandora, the War Goddess! 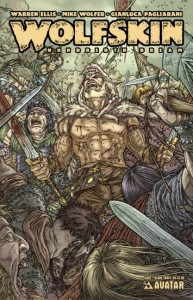 PRODUCT DESCRIPTION: ?Warren Ellis’ barbarian warrior returns in an all new series! His leather boots have carried him far, across an Earth both young and terrifying. He has wandered from the boreal climes of the his former home among the Northish tribes to the bustling seaports of the southern fjords, neither escaping his past nor embracing his future. But for the nomadic, berserker warrior named Wolfskin, past and future are about to collide in an unprecedented adventure of cataclysmic proportions. Having slaughtered his own tribesmen in the throes of an uncontrollable blood-rage, Wolfskin hopes to find a purpose in life by accepting a position as guide and hired swordsman on a rescue quest to the volcanic, High Northish ice plains. Accompanied by a rogues gallery of misfits and magicians perched between prehistory and the advent of technology, Wolfskin will become the central player in the greatest undocumented heroic legend to ever be lost in the corridors of time.