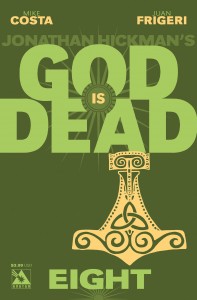 PRODUCT DESCRIPTION: Armageddon is upon us as MIKE COSTA continues the war of the divine with all new bi-weekly issues of God is Dead!? ?The World is at peace with Mother Earth Gaia the sole survivor of the epic war.? But a new resistance sets their sites on gods from the hidden pantheons to form a coalition to attack Gaia. But with more gods returning can this be trading one master for many?? JONATHAN HICKMAN?s unique vision of a world literally facing divine destruction roars on with new ravages from the gods of old. 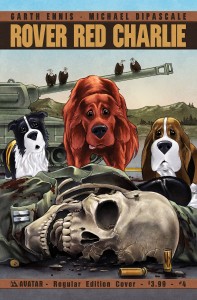 PRODUCT DESCRIPTION:? Is there nowhere a group of canine best friends can call home in the new world order?? Even outside the confides of the chaotic and bloody cities, Charlie and his pals Rover and Red face terrors that no dog should have to.? Three likeable companions attempt to find their way in a world that has literally gone to the dogs.??GARTH ENNIS, the master of original horror, has crafted a story that eloquently reveals the best and worst in human nature through the actions of man?s best friend. 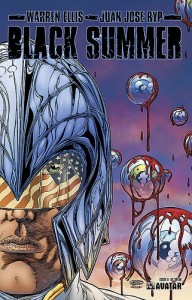 PRODUCT DESCRIPTION: ?The world goes black as Warren Ellis unveils his all-new super-powered heroes and villains epic! With art by the genius Juan Jose Ryp, no fan of The Authority or Wanted will want to miss this bleeding-edge eight issue masterpiece. This #0 features an original story that leads directly into the full-size series. When the political situation in the USA becomes more than Horus can stand, he moves to take matters into his own hands. But since not all his other team-mates aren’t so eager to throw the world into chaos, an epic conflict starts to form. And no one will be safe as the bodies start to fall.