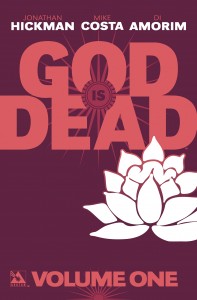 Coming in May, two of Avatar’s newest comic series will be collected into their first trade ?paperback editions. ?Jonathan Hickman’s God is Dead has changed the way fans look at mythology. ?With its modern take on the fate of the world under the thumb of the returned pantheons of old, the series has found a home among Hickman’s legions of fans. ?This first pivotal chapter setting up the God is Dead world is the perfect starting point for fans of East of West and Manhattan Projects to enjoy yet another of his creative universes. 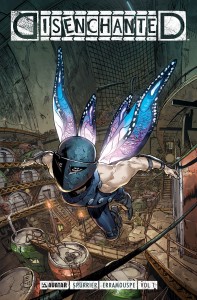 Disenchanted is the free webcomic by Crossed: Wish You Were Here scribe, Simon Spurrier. ?This series explains where magic went to die. ?When all the forgotten fairy folk inhabit a tiny city in an abandoned subway tube, they find out that even life among the tiny folk is full of violence and horror. ?In a tale that will appeal to readers of Fables and Grimm Fairy?Tales, Spurrier has created a world that is one part magic and one part modern crime drama. ?This initial trade paperback edition collects the full first chapter of the webcomic.

Both trades are being ordered by your local comic shop. ?Ask your retailer to reserve copies for you. ?Or find them on Amazon and Barnes & Noble.com.