Fans of the Netflix series Daredevil know that screenwriter Christos Gage is no stranger to writing vigilante fiction.  His original creation Absolution is one of the hardest hitting super vigilante stories you will ever read.  Imagine a mix of The Punisher and NCIS – that’s the type of story you will read in this fantastic series. 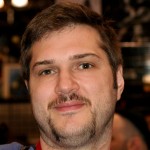 Follow the fall of cop-sponsored superhero John Dusk as the vile criminals around him cause him to slip out of the set of rules defining the police force and into a judge, jury, and executioner.  This tale not only vividly shows his fall from grace but also looks deep into the psyche of those running the police and his former super powered allies.  If you are missing new episodes of Daredevil – this is the perfect follow up to fill that craving.  Absolution is available at local comic shops, online at Amazon, and digitally at ComiXology: https://goo.gl/TMDK5e

PRODUCT DESCRIPTION:  Super-star writer Christos Gage cuts loose with his first Avatar series! John Dusk is a man of honor. He has been fighting crime inside the rules of the law. He respects the laws he’s been sworn to uphold. But day after day, bringing in the same scum, and watching the revolving door of justice… there comes a time when a man is pushed too far. When you’re bound by rules that the bad guys ignore, when the criminals are going free, when the worst kind of man is loosed on the world, when do you finally take a stand? Where do you draw the line between being the good guy, and getting the job done – permanently? Absolution is the story of masked heroes pushed to the brink, standing on their own, and against their best friends. Sometimes, a man just needs killing.