A New Chapter of War Stories 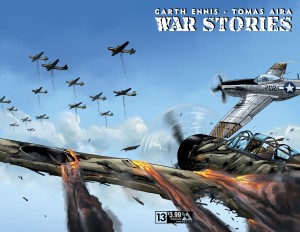 Garth Ennis has a way of telling the most poignant and powerful tales of war.  His stories focus not only on the action of the particular encounter but on the human element.  In War Stories Ennis finds a way to deliver powerful drama within the confides of horrific conflict. 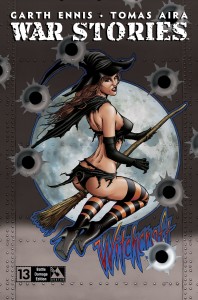 This week in comic shops War Stories #13 begins a new ark called “Tokyo Club” with artist Tomas Aria.  If you are a fan of history and the very real human horrors that happen when bullets fly, this is a perfect place for you to encounter one of the best and longest running war narratives being published.

PRODUCT DESCRIPTION:      How do you join The Tokyo Club? Simple. You climb into

your single seat, single engine fighter- loaded with fuel and ammunition- and fly 700 miles across the open Pacific until you reach the mainland of Japan. There you fight off any enemy aircraft attempting to hit the American bombers you’re escorting to their targets. Still alive? Now comes the fun part. You fly another 700 miles back home to your airstrip on Iwo Jima, fuel running lower and lower, nothing but ocean for miles around. Any battle damage you’ve suffered will reduce your chances even further. Make it back and you’re in the club. And more good news: you get to do it all again tomorrow. Part one of three, by Garth Ennis and Tomas Aria.