Simon Spurrier’s Crossed: Wish You Were Here Comes to ComiXology 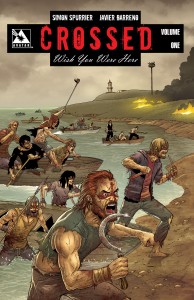 Simon Spurrier’s four volume story about the life and trials of Shaky was one of the most powerful entries into the world of the Crossed.  Unlike other shorter tales, this long form story allowed us to really get to know the flawed young writer as he attempted to live among the other survivors on their island escape.  But more than anything it felt like we watched something raw come to life in the pages

of this story.  Initially the likeable character showed what was really on the inside and the world around him fell to pieces.  Somehow, amid the carnage, it felt right.  And now this classic story is finally available in digital collections from ComiXology beginning tomorrow.

If you haven’t followed in Shaky’s footsteps, you should do so now.   It is one of a kind and it is sure to move you, make you laugh, and ultimately utterly horrify you.

This entry was posted in crossed and tagged avatar press, crossed wish you were here, digital, horror, simon spurrier. Bookmark the permalink.