You can find Avatar digital comics on ComiXology here: ?http://www.comixology.com/Avatar/comics-publisher/11-0

These comics are new to comiXology on Wednesday 10/30/13:

Escape of the Living Dead #1-5

In 1968, a blood-soaked night of terror began when the dead rose from their graves to devour the living. In the three years since, horrible experiments have taken place deep inside the concrete walls of a secret medical facility. Now, the untimely intervention of unwitting authorities sets free the dea to walk among the living once more. Can anything possibly stop this new, gut-ripping tide of carnage? John Russo, the co-creator of NIGHT OF THE LIVING DEAD, brings his new zombie masterpiece to comics, aided by horror comic legend Mike Wolfer. 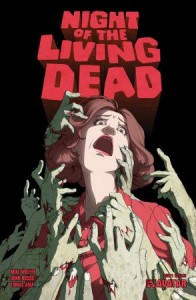 You’ve heard the eyewitness accounts and were shocked by the television reports, but now for the first time you’ll experience the horrifying events which led to that first Night of the Living Dead! John Russo, the co-writer of the 1968 cult classic film, joins horror comics scribe Mike Wolfer in presenting the official prequel to NIGHT OF THE LIVING DEAD, featuring the first chronological appearances and origin of the Cemetery Zombie, Sheriff McClellan, the murderous little girl named Karen, and the strong-willed hero of George A. Romero’s first LIVING DEAD film, Ben!

Night of the Living Dead: Aftermath #1-6 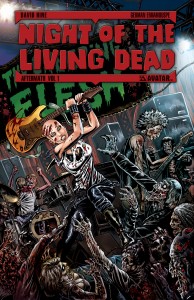 The original zombie phenomenon returns with horror writer David Hine directing the re-emergence of the undead in America. Set in the excesses of the late 1970s we follow the world as it has evolved with the zombie threat. The nation believes the epidemic contained, but when a virulent outbreak turns Las Vegas into a shambling graveyard, the government is forced to lock it down under quarantine. A group of unlikely survivors finds out the hard way that even with the undead, what happens in Vegas stays in Vegas. And in this case it means a female punk rock zombie fetishist has to grow up in a hurry and find a way out before the living are the last morsels on the ghoul buffet. This modern horror classic delivers a powerful human drama of grueling horror survival at the hands of the shambling dead!

Night of the Living Dead: ?Back from the Grave Special

The zombie series fans have demanded comes to comics in this fully-authorized series from the original creator: co-writer John Russo! This special ?issue features an all-new full-color story that takes place in 1968, before the original movie, as well as a special look at the upcoming series!

Before becoming flesh-eating recruits in the horrific army of the undead, each innocent victim of the plague had a personal tale of terror that ended on the NIGHT OF THE LIVING DEAD. Now, for the first time, the story behind one of the classic 1968 film’s iconic cannibals has surfaced and you have a front row seat! Starving herself for the sake of vanity, drive-in theater employee Laura Crampton is about to fall victim to stark-raving terror, but it will not been generated by the grade-Z horror film flickering on the outdoor screen. Tonight, blood will flow, lives will be torn asunder and bodies will be ripped apart, all by the hands of the nightmarish horde of zombies that lurk in the shadows on the night that would change the world forever!

Plague of the Living Dead: Special

Special super-sized full-color first issue! John Russo (co-writer of Night of the Living Dead) continues to horrify with his latest zombie epic: Plague of the Living Dead! Creeping through cemeteries, morgues and into the city streets, it reanimates the recently deceased, creating a horrifying army of the living dead, murdering and ravenously devouring the living. Nothing can stop it and no one is immune, as the uncontrollable plague begins to spread… The PLAGUE OF THE LIVING DEAD!

Jessica Price and the other residents of Stone Mountain, Virginia have anxiously watched the nightly news broadcasts, awaiting some word that the war in Vietnam will soon end and that the men that they love will return home safely. But now, other more disturbing reports begin to fill the airwaves, detailing the bizarre phenomenon of cannibalistic ghouls rising from their graves, hungry for human flesh. And this unprecedented horror is now lurking outside the doors of Stone Mountain, waiting to rip into the unsuspecting residents and feast upon their blood-drenched remains. While the CDC tries in vain to contain the plague spreading throughout the eastern United States, Jessica’s fiance and his US Army platoon will face the same terror, rearing its head in the jungles of Vietnam…