The following Avatar Press comics are new to ComiXology on Wednesday 2/5/14: 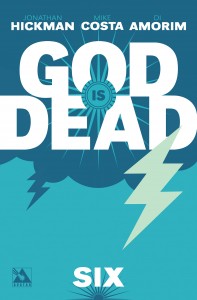 PRODUCT DESCRIPTION: The battle of the gods is over and one stands supreme above all of the world. ?This is truly the end of days?until the gods of humankind are born and rise up. ?From the very DNA of the gods, man has once again taken pride and hubris to the very brink. ?Three who would formerly oppose the gods as mortals now walk as the divine. ?And they must use their newfound divinity to battle the very god of gods. ?JONATHAN HICKMAN?s unique vision of a world literally facing divine destruction brings its first chapter to a close with the most shocking of endings. 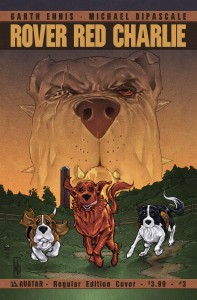 PRODUCT DESCRIPTION: ?These three canine companions have traveled out of the city, into the countryside and are now in unknown land fraught with danger. ?GARTH ENNIS delivers a story like no other, as an unlikely band of canines set out to survive in a world gone horribly mad and fully-painted by Michael Dipascale. ?Step into the mind of man?s best friend in a story that is one part Animal Farm and 100% Ennis! 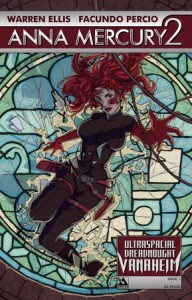 PRODUCT DESCRIPTION: ?Warren Ellis’ fiery red-head returns to once again explode into mad science-fiction action with the stellar art of Facundo Percio! A city-state from the strange superdimensional space of The Constellation sends a probe to Earth. To decide whether or not to make contact, the London office of the Constellation Project must send an agent through the fabric of the universe itself to the city of Three Souls Town, apparently populated by an oppressive society made of kidnapped humans. But that’s not how it starts. It starts with Anna Mercury, Earth’s top transuniversal explorer, UNDER RAY-GUN ATTACK IN A CITY BEYOND SPACE ITSELF! 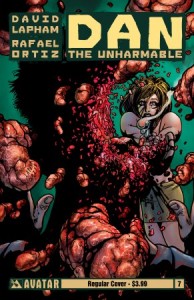 PRODUCT DESCRIPTION: ?A new story arc begins for David Lapham?s gonzo noir crime epic! Dan is your average indestructible slacker. He doesn?t really care about much ? a nap here, a burger there, and the occasional job to keep him in double digit cash. But when his would-be daughter Lizzy tries to determine who her real father is, she uncovers long forgotten secrets from Dan?s past that deal in bullets and disembowelment. Dan?s on the trail of a past that threatens to eviscerate anyone that gets close to it.

PRODUCT DESCRIPTION: ?From the time before history began: from the time when the continents were still connected by land: from the harsh climes at the top of the world, a Northish soldier wrapped in a cape of wolfpelts walks south, into the forests of the High Midlands that are now Europe, to find a village cut in two by travelers from the East. Soon, he too is torn – between duty to the lives he has ruined just by finding them, and duty to the hideous murder-god of the Northish wastes and the berserker drugs that are his sacrament… Warren Ellis cuts loose to unleash his take on the genre fans demanded he assault with full color art from Juan Jose Ryp! WOLFSKIN fuses heroic fantasy in the mode of CONAN, the Viking sagas, and samurai fiction into a single story of weird history and apocalyptic violence.

PRODUCT DESCRIPTION: ?Warren Ellis’ epic barbarian saga returns! Before history was recorded in stone and ink, some men wrote it in blood. In the world of the First Century, where broadswords, warhammers, and warriors abound, a man’s worth is measured by the swiftness of his reflexes and his preparedness to kill. From the far North, the roaming Wolfskin is a mercenary of unequaled might, dedicated to delivering the souls of his enemies to a blood-thirsty God. After travelling through the wooded realm of the sexy Feral Girl, Wolfskin has arrived in a bustling coastal community, where merchants and seafarers have transformed a primitive village into an economic paradise. But the architects of the seaport’s prosperity wear the brands of criminals, and only Wolfskin suspects that behind the veneer of the town’s thriving commerce lies a secret most vile. The tattooed Algizmen, disowned by the Gods themselves, know that Wolfskin must be destroyed before the contents of the mysterious casks that have brought the seaport its wealth are exposed!