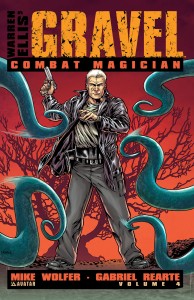 William Gravel has lived a hard life and its made him into a man with stone in his blood. ?Now the old soldier is being called back into action to deal with a rogue combat magician and monsters in the Japanese subway. ?The war horse has some kick left in him but will it be enough to take down a madman, a monster, and ninja combat magicians? ?You better bloody believe it.

New in July Previews the Gravel Vol 4 Combat Magician TPB collects the five issue story arc from the recent Gravel comic book series. ?Mike Wolfer ushers in the return of one of Warren Ellis’ longest running characters to the pages of comics! ?Ask your local comic shop to reserve a copy of this horror filled tome to complete your Gravel collection.